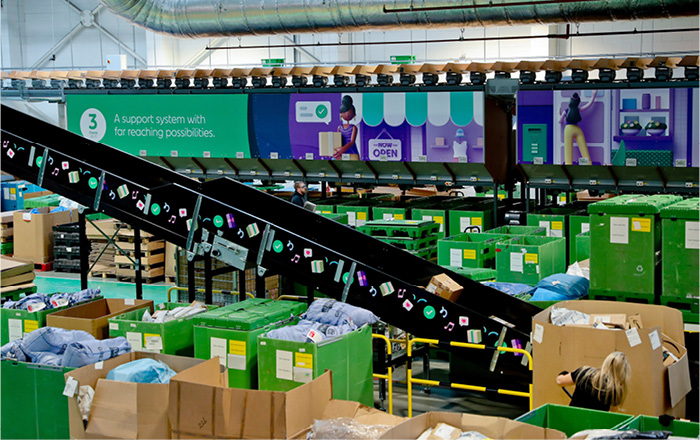 12th November, 2020:  An Post continues its transformation into one of Europe’s most sophisticated parcel handlers with the opening this week of a second ecommerce processing centre and the completion of Ireland’s largest ecommerce campus.

An Post’s latest investment in future-proofing its business is located at the Dublin Mails Centre in Dublin 12, right next-door to the new automated Dublin Parcel Hub which opened in November last year.  The An Post campus is now handling 2.5 million parcels each week.

Minister of State, with responsibility for Road Transport and Logistics, Hildegarde Naughton TD has welcomed the opening of the new centre, “The completion of Ireland’s largest ecommerce campus is an incredible achievement by An Post and is both welcome and timely as it works to deliver unprecedented volumes of parcels. This enhanced capacity will also serve as an opportunity for Irish businesses working to grow and enhance their online presence on the run up to Christmas and beyond. I want to congratulate An Post, and in particular, their staff for their role in keeping essential services operating through these turbulent times.”

“We are investing in the re-orientation of our whole business from the old world of traditional letters to new world of ecommerce parcels”, explained Garrett Bridgeman, Managing Director of An Post Mails & Parcels.

The type of smaller parcel handled by the new centre – padded envelopes and smaller boxed items –is growing really quickly in terms of both outgoing volumes from Irish companies selling worldwide and incoming online shopping from all over the globe.

We have invested over €30M in our Ecommerce campus providing world class national infrastructure for Irish businesses trading in Ireland or Internationally. Irish businesses can grow their ecommerce trading with confidence with An Post as their partner.

We have been preparing and significantly investing in our technology and infrastructure capability all year to support businesses post Brexit on January 1st.  We will be able to manage the changes that Brexit will bring for businesses and consumers in a seamless way,” he said.

Construction of the new processing machinery began earlier this year with full ‘go-live’ in November, in good time for the 2020 Christmas peak period.

Bridgeman says the new parcel centre opened just in time for the traditional Christmas rush. “We have been asking customers to bear with us. The largest delivery team in the country, using the very best technology, is working hard to make sure that mail and parcels are delivered.”

Staff currently working in the manual sorting of small parcels have been re-trained to support the new ‘Beumer’ Packet Processor which will handle 100,000 items a day.

Like its Beumer big brother next door, the new self-learning technology is purpose designed and can recognise Irish locations, eircodes and Irish language addresses, and can cope with a variety of sizes and formats.