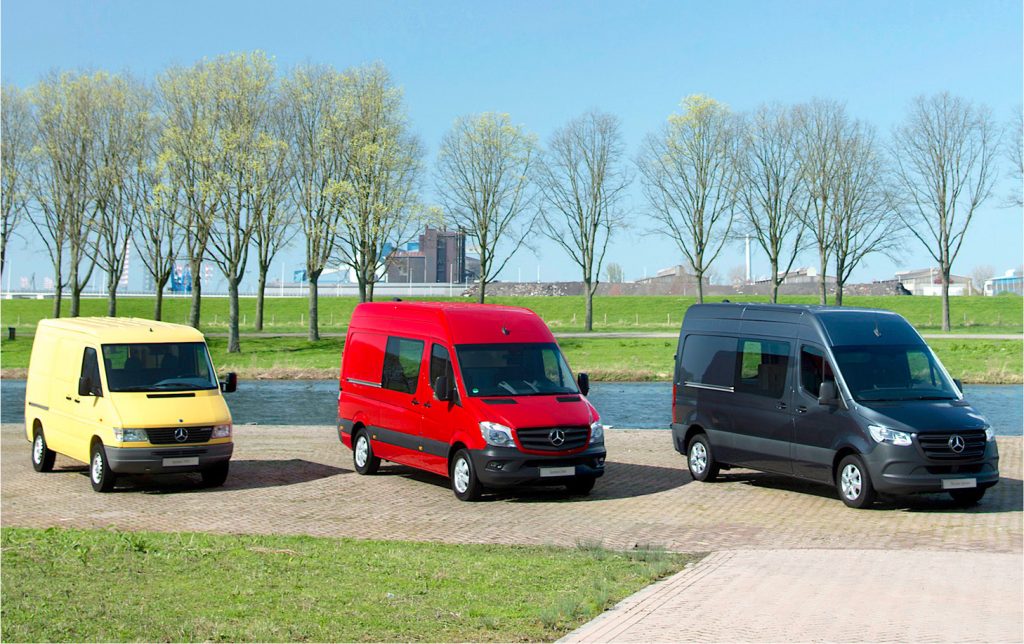 With some four million units sold worldwide, the Mercedes-Benz Sprinter van could be said to have celebrated the 25th anniversary of its introduction in style.

Now, with the expansion of its range to include the introduction of the all-electric eSprinter, the process of development continues sufficient to suggest that the next 25 years will be equally successful.

Its appeal was evident from an early stage, and has been ever since. Amongst those who study and write about such matters – that discerning body of journalists who make up the Continental Irish Van of the Year awards jury – Sprinter’s attributes have bestowed on it the enviable distinction of having won successive Irish Van of the Year awards on each occasion that a new model was launched on the market here.

Sprinter embodies attributes that make it a top choice in the large 3.0 – 5.5 tonne van segment and the carrier of choice amongst leading fleet operators, here and in more than 130 countries worldwide.

Known for its flexibility, robustness and economy, it is a big brand carrier, prominent amongst high-profile names in food, drinks, courier, parcels, and in engineering, manufacturing and servicing sectors. Its users include Coca-Cola, Tesco, Dunnes Stores, Supervalu, An Post, DHL, UPS, FedEx and more while, in health, it is to the fore transporting sick and injured, used by the HSE National Ambulance Service and BUMBLEance, the world’s first interactive children’s ambulance service.

Sprinter has a proud heritage, its foundations laid some 40 years prior to its introduction – beginning in 1955 with the Mercedes-Benz model L319. Powered by a 43hp diesel engine, it had a gross vehicle weight of 3.6 tonnes.

In 1967, the launch of the T2 ‘Düsseldorf Transporter’ brought comfort and ergonomics into the equation in a van that would revolutionise the market with an array of features like better soundproofing, power steering, automatic transmission and diesel engines up to 130 hp.

In 1977, the Sprinter’s direct predecessor was launched: the ‘Bremen Transporter’ model T1. With it, for the first time, came front disc brakes, followed later by innovations such as ABS and air conditioning. Then, in 1995, Mercedes-Benz became the first van maker to introduce anti-lock braking and ABS as standard.

Since then, Sprinter and each of its subsequent generations has set new standards in safety, ergonomics, efficiency and comfort. In 2002, ESP Electronic Stability arrived and, a year later, Crosswind Assist.

Seen as ‘an impressive all-rounder’ for any business sector, the high-spec, high-tech Sprinter has brought new levels of intelligent connectivity, superior comfort and, for the first time, front wheel drive to the market.

Easing the workload of controllers, dispatchers, drivers and others by linking managers to vehicles and drivers, assignments can be managed online whilst providing real time access to information such as location, fuel usage or maintenance intervals.

Representing Sprinter and Vito here is a team of sales, marketing and technical specialists supported in the field by a network of commercial vehicle dealers experienced in servicing the needs of business users.

Heading the Mercedes-Benz commercial vehicles sales division is Fergus Conheady. Commenting on Sprinter and its quarter century milestone, Conheady said: Sprinter and Vito vans epitomise the qualities customers expect from Mercedes-Benz. With its class-leading qualities and 25 years of successful operation to draw upon, and an impressive ‘who’s who’ of customers, Sprinter representatives and users can look forward together with confidence to another 25 years of successful operation.

One major development has been the recent arrival here of the new, more spacious all-electric eSprinter offering an option that allows fleet owners to demonstrate eco-friendly credentials.

Its electric power unit has peak output of 85 kW and up to 300 Nm torque. Battery capacity of 35 kWh (installed: 41 kWh) delivers usable factory-quoted figures of 120kms. It can be charged from 10% – 80% in just 70 minutes or over a more extended 6 hours using a standard 7.4 kW street/fuel station charge point. Maximum speed can be configured to suit the task in hand with top speed set at either 80 km/h, 100 km/h or 120 km/h.

Geared to counteract the problems of increasing urbanisation, growing traffic levels, stricter air purity requirements and demands for sustainable mobility, the eSprinter – with its smaller eVito mid-sized stablemate – is the product of a €500m investment by Mercedes-Benz to create more eco-friendly vehicles.

In a further comment spoken on behalf of his Mercedes-Benz team and their dealers, Fergus Conheady expressed gratitude to their many customers whose support and loyalty has helped Sprinter reach what he said is “this very significant milestone in its history”.