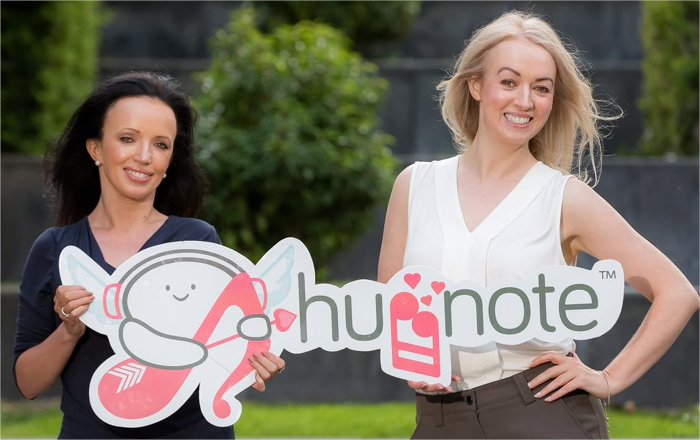 Irish Start-Up Huggnote has won the top prize of $50,000 on a major US TV Show. The Limerick-based company – a messaging app that turns songs into virtual ‘huggs’ – was the first Irish start-up to be selected as a finalist for the show ‘Two Minute Drill’, which airs on Bloomberg TV and Amazon Prime – reaching 100 million homes in the US and around the world.

The show, which is hosted by world-renowned entrepreneur, investor, and best-selling author David Meltzer, saw Huggnote founder Jacqui Meskell, compete against four other entrepreneurs from an array of industries, whereby each have just two minutes to deliver a winning pitch that convinces four esteemed judges their business has what it takes to become the next big thing.

Two Minute Drill is a passion project of Mr Meltzer, who wanted to create a medium whereby founders could not only hone their pitching skills under extreme pressure, but also inspire and educate other businesses on what it takes to effectively communicate their businesses, whether on TV or in the boardroom. After the pitch the contestants also receive practical feedback on the highs and lows of the pitch and gain insights into what they can improve in the future

Mr. Meltzer was joined on the panel by three other top US entrepreneurs/investors Rory Cutaia, CEO of Verb Technologies (NASDAQ: VERB), the #1 sales enablement platform, Jayson Waller, host of the True Underdog Podcast and CEO of POWERHOME Solar; and Rusty Youngblood COO and co-founder of The Outpost and Outpost Ventures, a multi-million dollar business and fund. The other companies being presented included hardware and software products ranging from including a security-focused mobile payments platform, marketing agency, air-quality tech ecosystem and a tech platform for caregivers.

During her pitch the Limerick-based founder stressed Huggnote’s strong traction and global user adoption. However, of her performance on the night Jacqui said she didn’t get to fit everything in: “It’s definitely a lot harder than it looks! Trying to cover all key elements of the business, while fighting a ticking clock on live TV (the show was recorded as live) is a lot of pressure. And then of course there’s always the possibility you’ll be torn apart by the panel – so it’s not for the faint hearted. But I just focused on communicating our vision for Huggnote and tried to connect as authentically as I could, not just with the panel but the viewing audience at large and thankfully it paid off,” she said adding that she was particularly delighted with the feedback from the panel.  “You never know how these things will go. You just have to be yourself.  And so, to get such positive comments was really gratifying,” she said.

“You had me at hello and 250k BETA users, nobody has that,” said host David Meltzer – referencing a famous quote from the movie Jerry Maquire, which was inspired by the renowned Leigh Steinberg Sports & Entertainment agency, of which Mr. Meltzer is former CEO.  He praised Huggnote’s branding as “excellent” and as someone who ‘backs the jockey’ was particularly impressed by Jacqui herself calling her “completely illuminating and honest. That’s someone I want to invest in. That gives you brownie points. A really, really quality pitch… I appreciate your honesty, humility and charisma,” he said.

“That’s someone I want to invest in. A really, really quality pitch. I appreciate your honesty, humility and charisma,” David Meltzer

“I think it’s cool. I loved the emotional connection. I really liked it, you did a great job,” Dave Waller said of the pitch. “It felt warm, it felt good, it felt touching. I really liked it and it’s cool and unique and it’s different. Plus 250 thousand BETA users right now, when I heard that I was like ‘ding’”

Rory Cutaia cautioned Jacqui to “watch the clock” but added: “You came off as delightful. Someone that is trustworthy and experienced. Sounds like you’ve got a great team and a very interesting market niche. Good luck to you,“ he said.

“You’re honest, you’re transparent, that adds to the authenticity. There’s passion in what you’re saying,” said Rusty Youngbood whose venture fund provides the winning investment. “If I’m going high marks on pitch, high marks on business, Jacqui is the clear winner in my book,” he said.

But the key deciding factor in any pitch competition according to the panel is clarity. “At the end of two minutes I want to know what do you do?” said Mr. Meltzer. “For me, Jacqui was the only one where all three of you could answer what they truly do. Congratulations Jacqui you checked all the boxes for David Meltzer on ‘Two Minute Drill,” he said before asking her to send them all a ‘thank you’ hugg.

“We’re absolutely delighted,” says Jacqui. “We were honoured to just be selected as it is such great exposure for Huggnote in the US – a key market of ours. But to be chosen as the winner by such an elite entrepreneurial panel is a great confidence boost because these guys really know what it takes to build and scale nine-figure companies,” she said.  She also praised her fellow contestants on their success.

Speaking after the show Mr Meltzer, considered one of the world’s top e-sport entrepreneurs said of Huggnote’s potential: “Huggnote is one of those ideas that seems so obvious you wonder why nobody else has done it before. When I first heard Jacqui speak about her passion for Huggnote’s mission, it resonated with me immediately. As a sports executive and former athlete myself, I’ve long understood the power of music to motivate and energize athletes, and now Huggnote is harnessing that same power for everyone. With users in every country in the world, Huggnote’s potential to create a happier and more connected world is clear.”

“I’ve long understood the power of music to motivate and energize athletes, and now Huggnote is harnessing that same power for everyone. With users in every country in the world, Huggnote’s potential to create a happier and more connected world is clear,” David Meltzer

Co-founder and sister Perry said “I’m so proud of Jacqui and delighted the judges were so impressed with Huggnote. It’s the best possible introduction not only to new audiences of users across the US and indeed globally, but the start-up ecosystem at large in the States”.

The prize also includes mentorship from the panel, which the founders consider the most valuable aspect of winning on the show, citing David Meltzer in particular, who is also a top 100 business coach and host of entrepreneur podcast The Playbook – as a major inspiration. “The panel are all very mission oriented and and we love for example that ‘doing good whilst making money’ is a stated aim of judge Rusty Youngblood of Outpost Ventures, who generously provide the financial investment for the prize” says Jacqui. “So we’re very proud to work them and also Mr. Waller and Mr. Cutaia who are highly experienced and influential business leaders,” she said. “Having David Melzter, in particular, as a mentor has been a long-standing goal of ours. We’re deeply impressed by his integrity and obviously we’re very aligned with his mission of empowering 1 billion people to be happy. Huggnote is in the happiness business at the end of the day and a huge platform like this – reaching 100 million homes – that’s potentially a lot of huggs, putting smiles on a lot of faces,” she said adding “And yes, him saying ‘you had me at hello’ was a real pinch me moment. We couldn’t have hoped for a better outcome”.