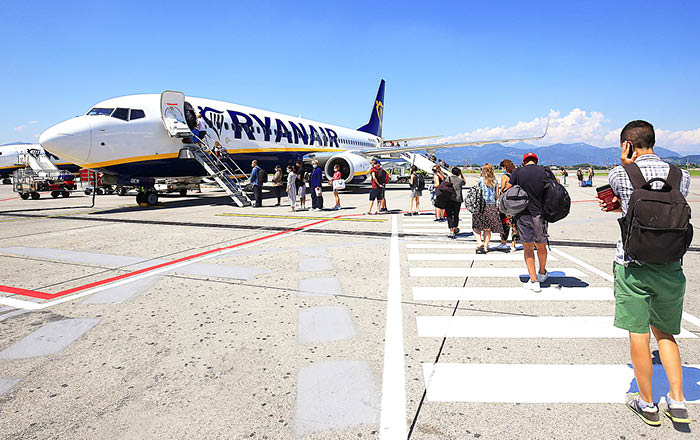 Ryanair, Europe’s largest airline, today (Wed 19th Aug) called on the Irish Government to revise its travel Green List to include those EU countries such as the UK and Germany, which have lower Covid case rates than Ireland, and others such as Portugal, Austria, Poland and Greece, whose Covid case rates are similar to Ireland, to allow business travel to/from the EU to resume in Sept, and to allow Ireland’s economy to recover from NPHET’s mismanagement.

Ireland is the ONLY EU country that has maintained an isolationist “closed for business” air travel policy since 1 July last, when most other EU countries reopened for intra-EU flights, and business travel. When the leading scientists and medical experts in most other EU states as well as the ECDC confirmed it was safe to return to intra-EU flying, Ireland’s NPHET adopted a unique and extreme position, which effectively banned intra-EU air travel, except from a tiny list of countries, 4 of which (Greenland, Monaco, Gibraltar and San Marino) have no flights to and from Ireland!

Over the past 8 weeks, when other EU countries such as Germany and Italy, who have an effective test and trace regime, have successfully managed the return of intra-EU flights and economic activity, NPHET has presided over a confusing shambles in Ireland, which has deterred EU visitors, yet it has failed to prevent a rapid rise in Covid cases despite these stringent restrictions.

When Ryanair announced on 29th May that it would return to flying on 1 July, but with mandatory face masks, some NPHET members criticised this move claiming that the evidence on face masks was “not fantastic”. It was only in mid-Aug – 3 months later – that NPHET were finally dragged into supporting mandatory face masks. This is another example of NPHET’s mismanagement of the Covid virus in Ireland and their mishandling of reopening of Ireland’s economy.

A Spokesperson for Ryanair said today:

“NPHET and Ireland are the laughing stock of Europe. We have operated the most isolationist travel policy in Europe since 1 July, yet our Covid case rates are now significantly higher than many other EU countries such as Italy and Germany, who removed intra-EU travel restrictions in July and have successfully managed a return of economic activity with much lower Covid case rates than Ireland. NPHET’s Green List has clearly failed to prevent the recent surge in Covid cases in Ireland, and since Germany and the UK now have lower Covid case rates than Ireland, it is essential that these large economies are immediately added to Ireland’s Green List, or better still, Ireland’s failed Green List is abandoned altogether for flights to/from the EU and the UK.

The Irish Govt should be challenging NPHET on its failure to deliver an effective test and tracing system in this country. As other EU countries introduced airport testing, NPHET are still filling in paper forms that are not followed up, and imposing a defective 14 day quarantine, which has destroyed inbound tourism to Ireland. When our schools return at the end of Aug, Ireland’s hotels and restaurants will be empty because of the absence of EU visitors caused by NPHET’s mismanagement of intra-EU travel since 1 July last.

When the scientists and medical experts of most other EU countries supported the safe return of intra-EU air travel since 1 July last, where is the science that supports NPHET’s unique and isolationist Green List, which has failed to prevent a second wave of Covid cases here in Ireland? At a time when Ireland has just 14 Covid patients in our hospitals, why are our businesses being prevented from booking air travel to and from other EU countries – many with lower Covid case rates than Ireland – when citizens of these EU countries are travelling freely and without Ireland’s Green List restrictions.

NPHET have spectacularly mismanaged this failed Green List. The Govt must now act to remove travel restrictions on business travel to/from Germany, the UK and these other EU countries where the Covid case rates are as similar or lower than Ireland. It is Governments job to govern, to reopen our economy, to remove these failed quarantines, and introduce an effective and efficient test and tracing system so that Ireland’s schools and businesses can get back to work in September.”