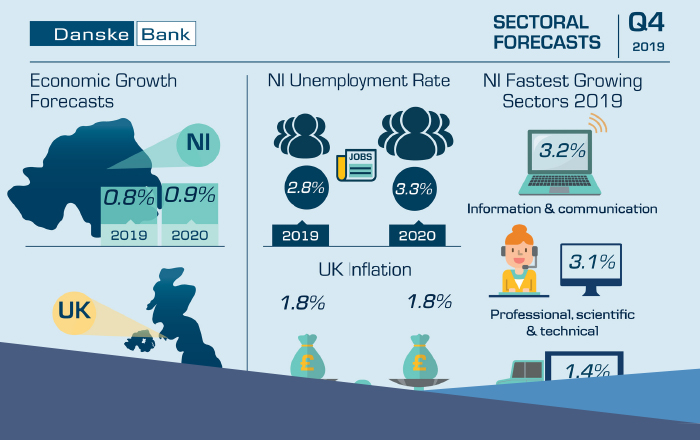 Danske Bank has slightly lowered its Northern Ireland economic growth forecasts, and now expects the local economy to grow by 0.8 per cent in 2019 and by 0.9 per cent in 2020.

In its latest Northern Ireland Quarterly Sectoral Forecasts report, Danske Bank said that the Northern Ireland economy appears to have contracted in the third quarter of 2019, negatively impacted by local and national political uncertainty, low confidence and slower global growth.

Danske Bank Chief Economist Conor Lambe said: “In 2020, the pace of economic growth in Northern Ireland is expected to rise slightly compared with last year, but to remain modest. Inflation is likely to stay low and the labour market is expected to remain in reasonably good health, leading to continued strong real wage growth. Therefore, household spending power should remain solid throughout the year with growth in consumer spending expected to track gains in real incomes.

“However, uncertainty about the long-term trading relationship between the UK and the EU is likely to weigh on business investment and the modest pace of global economic growth is expected to constrain exports again this year.”

Expected output growth in the wholesale & retail trade sector has been revised down slightly to 0.8 per cent for 2019 and 2020.

The forecast for growth in the manufacturing sector has been revised downwards to 1.0 per cent in 2019 and 1.1 per cent in 2020.  The latest Index of Production data showed a decline in manufacturing output of 1.4 per cent over the quarter to 2019 Q3, with the weakness potentially exacerbated by firms continuing to run down stocks that they had accumulated at the start of the year to guard against a potential ‘no-deal’ Brexit.

Public administration & defence will likely continue to drag on growth, with output expected to contract by 0.8 per cent in 2019, and by a further 0.3 per cent in 2020.

The labour market in Northern Ireland picked up pace in the third quarter of 2019, despite the weaker economic environment.

However, Danske Bank does not expect the recent strong pace of jobs growth to be maintained — instead firms are likely to shift their focus away from recruitment and more towards productivity improvements, in part due to the little spare capacity left in the labour market.

The mining & quarrying and water supply sectors are estimated to have experienced the fastest rate of employment growth in 2019. However, due to the small size of these sectors, their contribution to the expected overall number of new jobs in the economy is small.

Brexit still poses a risk to economic growth in Northern Ireland, while Danske Bank also noted the global economic slowdown and trade tensions between China and the US as other notable risks.

Conor Lambe said: “Given the UK Government is unlikely to be enthusiastic about retaining very close alignment with EU rules or to want to accept much tighter restrictions on access to the EU market, we think agreeing a new UK-EU free trade agreement will prove more complicated than expected. In addition, for businesses in Northern Ireland, there is still a lack of clarity around what processes would need to be followed on trade between Northern Ireland and Great Britain once the transition period ends.”

He added: “Should trade tensions between the US and China re-escalate again, this would have stark implications for both economies, as well as negative spill over effects for the global economy.”