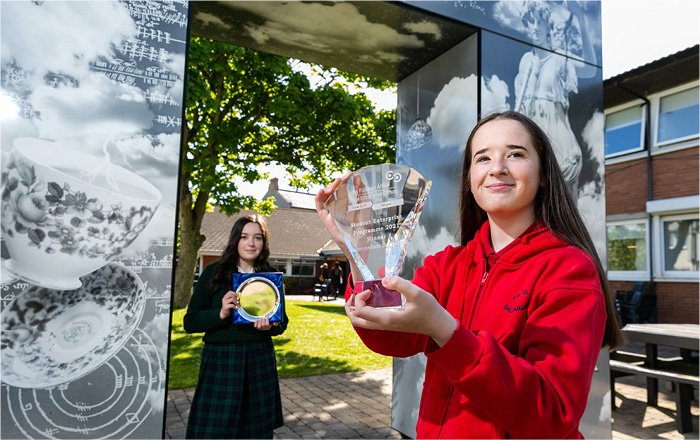 Students from Fingal have taken the Special Merit prize in Intermediate category at the National Final of this year’s Student Enterprise Programme (SEP). The Finals of the Local Enterprise Office (LEO) initiative were broadcast virtually on Friday from Croke Park with An Tánaiste Leo Varadkar and Ambassador Derval O’Rourke speaking, as students and teachers watched on from across the country.

Supported by LEO Fingal, the students of Loreto Balbriggan won Special Merit prize in Intermediate category. The winning students were: Emily Carroll, Lucy Barnwell, and Hannah Barnwell, who worked under the guidance of their teacher, Paula Gartland. Their student enterprise was called: ‘Bee Happy’.

In the Senior Category of the competition, Fingal was represented by students Robert Doyle and Cillian Hayes at St. Fintan’s Highschool in Sutton, with their business “Dublin Sanitize”.

There were 72 student enterprises competing in this year’s National Final in what is Ireland’s largest entrepreneurship programme for second level students.  The initiative, funded by the Government of Ireland through Enterprise Ireland and delivered by the 31 LEOs in local authorities throughout the country, saw 29,000 students from almost 500 secondary schools across the country take part.

An Tánaiste, Leo Varadkar, who took part in the ceremony, congratulated the students: “Congratulations to not only the finalists being recognised here today, but to everyone who took part in the competition. To be a finalist in the Student Enterprise Programme is a fantastic achievement in normal times and its incredible given everything that’s happened this past year. Everyone who took part should be very proud of all that they have achieved. Special mention to their teachers, parents and all those who helped them along the way. The ability to create an idea, turn it into a business and to run that business is a skill that will be invaluable later in life.  Ireland has a proud history of entrepreneurship and no doubt those here today will all go on to achieve great things. Government will back you every step of the way.”

We were delighted to see Loretto School in Balbriggan who picked up the Special Merit award at Intermediate category. I was delighted to see Swords Community College representing Fingal in the Junior category, a fantastic achievement for a brand new Fingal school. And St. Fintan’s from Sutton enthusiastically represented Fingal at Senior category level – the third time this school has won senior prize”.

Hecontinued: “Year-on-year the Student Enterprise Programme continues to produce the absolute best of ingenuity and entrepreneurship amongst our secondary school students. It’s no surprise to see the challenges thrown up by the pandemic featuring in many of the businesses and the ongoing willingness for students to create businesses that not only sell services or products, but that help address ongoing issues in society. We see every year that the National Finals are not an end point for our student entrepreneurs, but a steppingstone on the next stage of their entrepreneurial journey.  From our class of 20/21 we will see some business leaders and global entrepreneurs of the future emerge.”

The National Finalists, who competed across three categories, Junior, Intermediate and Senior, saw judging take place virtually via electronic submissions. Each student enterprise was challenged with creating, setting up and running their own business, which must show sales of their service or product.  The judging panel included business owners and representatives from enterprise agencies and associated bodies. The Fingal winning school, Loreto Balbriggan, was the only school from across the whole of Dublin region to win one of the coveted National awards.

Since the Student Enterprise Programme began in 2003, over 250,000 students have taken part, learning key skills on how to create a business idea, start a business and grow a business. Many of these students are running their own businesses and all of them have learned a great deal about enterprise from the programme.

Full details of all this year’s 72 national finalists are available on the SEP website at www.StudentEnterprise.ie